Agumbe ” The Cherrapunji of South “

Posted on June 8, 2017 by admin
Share this on WhatsApp

Agumbe (Kannada: ಆಗುಂಬೆ) is a small village located in Shimoga district, Thirthahalli taluk in the Malnad region of Karnataka, India. It is sometimes called “The Cherrapunji of the South” after Cherrapunji, in Northeast India.The elevation of Agumbe is 643m.As part of the Western Ghats mountain range, Agumbe lies in a UNESCO World Heritage Site. Agumbe is near the Someshwara Wildlife Sanctuary and the Kudremukh National Park.Agumbe is associated with rainforest conservation efforts, documentation of medicinal plants, tourism (trekking and photography), and promotion of cottage industry.

Agumbe Venugopalakrishna Temple – The old temple at agumbe is a beautiful structure and peaceful place to be at. The temple deity is Sri Venugopala Krishna. An annual fair is conducted here, in honour of the village deity, Sri Venugopala.The fair is held every in the month of February and is a grand event. When prayed, every devotee’ s wishes are said to be fulfilled.

Sunset View Point rests on one of the highest peaks of the Western Ghats on the Udupi-Agumbe Road. It is ten minutes walk from Agumbe. On a fine evening, the sunset can be seen over the Arabian Sea.

Barkana Falls :Barkana Falls is in  Northeast of Agumbe, is 850 ft/259 mts in height. It is the tenth highest falls in India.The viewing point for the Barkana Falls is about 4 km from the end of the approaching vehicle track. 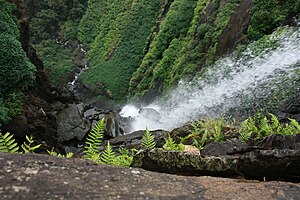 View from atop Onake Abbi Falls

Onake Abbi Falls at 400 feet, is smaller than Barkana Falls. In the Kannada language, “onake” means ‘pounding stick’, an instrument used by villagers to pound grains to flour. Trekking for 5 km through rainforest is needed in order to reach a view of the falls.

Jogigundi Falls : Jogigundi is a small water fall near Agumbe.This is about 800m deep. It is usually filled with water.

Rainforest is a dense, wet, tropical evergreen ecosystem, high in its level of biodiversity. According to the ‘Champion and Seth’ classification, Agumbe is an area of “Southern tropical wet evergreen forests” (1A/C4). R.S. Troup, an eminent forester of his day, said,

“The tropical evergreen rain forests are characterised by the great luxuriance of their vegetation which consists of several tiers, the highest containing lofty trees covered by numerous epiphytes.

Agumbe provides an environment for large and small mammals such as the endangered lion-tailed macaque, tiger, leopard, sambar, giant squirrel, Dhole, a wild dog of India, Gaur, the Indian bison and barking deer.

Malgudi Days (1985) is a television serial directed by Shankar Nag. It was based on novels written by R. K. Narayan. Many episodes were filmed in Agumbe.In 2004, a new set of episodes of Malgudi Days was filmed at Agumbe by Kavitha Lankesh (director).