Posted on August 15, 2017 by admin
Share this on WhatsApp

Assam has both the largest and the smallest inhabited river islands in the world. Smallest being Umananda in the Brahmaputra – where a famous temple by the same name is located, and serves as a famous tourist attraction and the largest inhabited river island is Majuli, also on the river Brahmaputra. The island has been the hub of Assamese neo-Vaishnavite culture, initiated around 15th century by the revered Assamese saint Srimanta Sankardeva and his disciple Madhavdeva.

Majuli or Majoli, the largest river island in the world got its name because it snuggles between mighty Brahmaputra and its anabranch Kherakutia Xuti. Situated in the state of Assam .Majuli had a total area of 1,250 square kilometers which has now reduced to 421.65 mainly due to erosion.

Majuli is about 20 kilometers from Jorhat a very significant commercial town of Assam. The only way to reach Majuli is through a ferry which is an experience in itself. You ride that ferry along with big and small vehicles, live stock, school and college children, office goers and all sorts of supplies because that’s the only way to connect the island to the mainland. There are at least two ferry rides to Majuli and you cannot afford to reach late for they operate with the punctuality .

Ferry ride to Majuli one can’t afford not to have it . Once on the ferry one has a choice to continue to sit in the car or take the benches meant to seat the passengers. You also have the choice to stroll around the ferry and feel the wind on your face. One can go  even a step further and take the ladder to reach the top of the ferry. What you can feel is cannot be expressed in words. In the middle of invincible Brahmaputra which is both beautiful and fierce. It’s so extraordinary that it makes you ordinary. You feel helpless and blessed all at the same time.

Majuli is the centre of the neo-Vaishnavite religion, art and culture. In fact, it is considered to be the Vatican of neo-Vaishnavism. It was way back in the 16th century that Mahapurush Srimanta Sankardeva along with his chief disciple, Madhabdeva, laid the foundation of the Satra culture in Majuli, which ushered in an era of distinctive religio-cultural heritage. 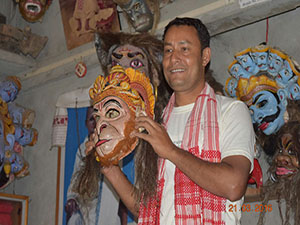 Mask making is one of the most famous traditional crafts still practiced in Majuli. Natun Chamaguri Satara has worldwide acclaim in making exquisite masks. It has been practiced by the Bhakats here for centuries. Masks are an integral part of Sattriya culture. Traditionally, masks were used for religious dance and drama. They were conceptualized as a tool by Shri Shankaradeva to make and depict the characters of Srimad Bhagwat to the devotees.

The local languages here are Mishing, Assamese and Deori. Agriculture is the main source of income in the town; around 100 different varieties of rice are grown in Majuli. Komal Saul, a unique type of rice is eaten by locals as a breakfast cereal while the Bora Saul is a sticky brown rice used to make Pitha, a traditional cake. Pottery, handloom, boat-making, fishing and dairying are some of the other important economic activities. Face masks and pottery are a must-buy from Majuli.

BEST PLACES TO EAT IN MAJULI

Majuli offers typical Assamese cuisine to the visitors. The popular items that you might find here include Khar, Laksa, Tenga and a few varieties of rice. Make sure you try the Pitha and the Komal Saul cereal.