Posted on January 22, 2019 by admin
Share this on WhatsApp

Paro Taktsang (also known as the Taktsang Palphug Monastery and the Tiger’s Nest) is a prominent Himalayan Buddhist sacred site and the temple complex is located in the cliffside of the upper Paro valley in Bhutan.The Tiger Nest monastery in Bhutan is counted as one of the fascinating sights in the world.Taktsang, or the Tiger’s Nest Monastery, is one of the most sacred sites in Bhutan and a place you must visit when you visit Bhutan.

A temple complex was first built in 1692, around the Taktsang Senge Samdup cave where Guru Padmasambhava is said to have meditated for three years, three months, three weeks, three days and three hours in the 8th century. Padmasambhava is credited with introducing Buddhism to Bhutan and is the tutelary deity of the country. Today, Paro Taktsang is the best known of the thirteen taktsang or “tiger lair” caves in which he meditated.

The temple devoted to Padmasambhava (also known as Gu-ru mTshan-brgyad Lhakhang, “the Temple of the Guru with Eight Names”) is an elegant structure built around the cave in 1692 by Gyalse Tenzin Rabgye. It has become the cultural icon of Bhutan.A popular festival, known as the Tsechu, held in honor of Padmasambhava, is celebrated in the Paro valley sometime during March or April.

The monastery is located 10 kilometres (6.2 mi) to the north of Paro and hangs on a precarious cliff at 3,120 metres (10,240 ft), about 900 metres (3,000 ft) above the Paro valley, on the right side of the Paro Chu (‘chu’ Bhutanese means ”river or water”. The rock slopes are very steep (almost vertical) and the monastery buildings are built into the rock face. Though it looks formidable, the monastery complex has access from several directions, such as the northwest path through the forest, from the south along the path used by devotees, and from the north (access over the rocky plateau, which is called the “Hundred Thousand Fairies” known as Bumda (hBum-brag). A mule track leading to it passes through pine forest that is colorfully festooned with moss and prayer flags. On many days, clouds shroud the monastery and give an eerie feeling of remoteness. 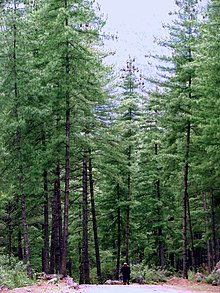 Pine forest in the area

Near the beginning of the trail is a water-powered prayer wheel, set in motion by a flowing stream. The water that is touched by the wheel is said to become blessed and carries its purifying power into all life forms in the oceans and lakes that it feeds into.[14] On the approach path to the monastery, there is a Lakhang (village level monastery) and a temple of Urgyan Tsemo (“U-rgyan rTse-mo”) which, like the main monastery, is located on a rocky plateau with a precipitous projection of several hundred feet over the valley. From this location, the monastery’s buildings are on the opposite ravine, which is known by the name “Copper-Colored Mountain Paradise of Padmasambhava”. This is the view point for visitors and there is a cafeteria to provide refreshments. The trek beyond this point is very scenic with the sound of the water fall breaking the silence.Along the trek route blue pine trees, prayer flags and kiosks selling paraphernalia for worship (such as prayer wheels, temple bells and skulls) are seen. The route is scattered with number of temples. On this path, a large water fall, which drops by 60 metres (200 ft) into a sacred pool, is forded over by a bridge. The track terminates at the main monastery where colorful paintings are displayed. Guru Rinpoche’s cave where he meditated is also seen. This cave is opened for public viewing only once a year.